Popular
Police Officer Dies From Cardiac Arrest During SWAT...
PLEASE SET ASIDE TIME TO LISTEN TO THIS:...
“The Regime has Guns and Bullets but they...
Chaos Erupts as Large Group of Juveniles Brazenly...
Ignore the howls of protest: It’s right to...
WOW! Tyrant Trudeau Sends His Support to Iranian...
STUNNING Report in The Atlantic: Did Famous Doctor’s...
PEAK 2020: 240 Pound Plus-Size Model Scores Exclusive...
“People Don’t Want Their Children Sexualized!” – HUNDREDS...
Leftists To Protest Arizona Judge’s Ruling On Arizona...
Home Business Two-thirds of UK’s top restaurants in the red after Brexit, Covid and inflation
Business

Two-thirds of UK’s top restaurants in the red after Brexit, Covid and inflation 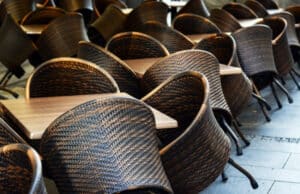 Debt repayments, staff shortages and rising energy bills have pushed almost two-thirds of the UK’s top 100 restaurants into the red, according to research that reveals the impact of the pandemic, Brexit and the cost of living crisis on the hospitality sector.

With a recession looming and further increases in energy bills weighing on businesses, a separate report found that £700m of business rates relief remains unpaid with only half of English councils paying out the support funds.

A record 64% of the biggest restaurant companies are now making a loss, according to the accountancy firm UHY Hacker Young. Several have suffered heavy losses due to major restructuring programmes undertaken following the pandemic, and because of debt repayments, particularly to landlords.

The restaurant sector had expected a recovery in profits following the pandemic, but this has been jeopardised by spiralling food inflation and a fall in consumer confidence caused by interest rate rises.

Restaurants have also been hit by labour shortages, forcing them to restrict covers and therefore reducing the amount of revenue they are able to generate, especially at peak times.

Peter Kubik, partner at UHY Hacker Young, said many in the restaurant sector were anxious about further falls in consumer spending as Britain moves closer to recession. The Bank of England is forecasting a recession lasting longer than a year and inflation rising above 13%.

“It may be a case of ‘out of the frying pan, into the fire’ for many UK restaurant groups,” Kubik said. “They expected, and needed, higher consumer spending as we put Covid further behind us, but this spending is now likely to fall when it is needed most.”

The restaurant sector was facing difficulties even before the pandemic. Many groups took on large amounts of debt to fuel aggressive expansion campaigns, which pushed them into a loss even before the virus outbreak led to lockdowns and temporary restaurant closures.

However, in the longer term, many restaurant groups are expecting to return to profitability, according to the report. The restructuring programmes have reduced the size of their debts, while several major chains have closed unprofitable branches and renegotiated rents through voluntary arrangements.

They include The Restaurant Group, which owns the Wagamama and Frankie & Benny’s chains, and now runs 400 restaurants and pub restaurants.

Meanwhile, only about half of councils in England have started making support payments to businesses from a £1.5bn rates relief package announced by the government in March 2021, a freedom of information request made by the property consultancy Gerald Eve has found.

It asked all 309 councils in England how much they had paid out to local businesses. Of the 219 who replied, just 58% have started paying out anything, despite a deadline for concluding relief payments coming in less than two months.

The support package was aimed at businesses such as manufacturers, warehouses and office occupiers that had not been granted any business rates support unlike retailers, leisure and hospitality.

Responding councils that have started making payments account for £667m of the £1.5bn funding package but have so far paid out just £351m.

Extrapolating this trend to all 309 councils in England suggests that only up to £790m will be paid out by the deadline. Any surplus must be handed back to the government, short-changing businesses by about £700m, the consultancy said.

Councils that had not made any payments by the time of the FOI request include Cambridge, Cornwall, Dover, Milton Keynes, Sheffield and Wigan as well as Hackney, Hammersmith and Fulham, Hounslow and Kensington and Chelsea in London.

Read more:
Two-thirds of UK’s top restaurants in the red after Brexit, Covid and inflation