Next in talks to take £15m stake in struggling chain Joules 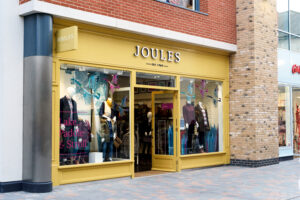 Next is in talks to take a £15m stake in the struggling high street retailer Joules.

Joules, whose share price has slumped by almost 90% over the last year, said it was in talks with Next about raising the sum in a deal that would result in the clothing and homeware retailer taking a strategic minority investment in the company.

Under the terms of the deal, Next could take a stake of about 25%, according to Sky News.

“Joules confirms it is in discussions with Next about a potential equity investment raising proceeds for Joules of circa £15m at no less than Joules’ current market price, which would result in Next becoming a strategic minority shareholder in the group,” the company confirmed in a statement on Monday.

“The equity investment would be subject to approval by Joules’ shareholders. There can be no certainty these discussions will lead to any agreement.”

Joules, which has about 130 stores and employs more than 1,000 people, also announced it was in talks to use Next’s online platform to run its digital operations. Next already sells Joules clothing through its own website.

The deal will involve the transitioning of Joules’s existing online operation, warehouse, distribution and logistics to use Next’s services, Total Platform, to run its retail websites and back-end operations.

“Joules confirms that it is in discussions with Next about adopting its Total Platform services to support the group’s long-term growth plans,” the company said.

Next has struck similar online services joint-ventures with companies including Reiss and Victoria’s Secret.

In April, Next and a group of investment firms took control of maternity and baby clothing retailer JoJo Maman Bébé.

Last week, Next said it expected to make £10m more in annual profits than previously thought after a rise in sales of suits and summer outfits boosted sales.

The company said full-price sales rose by a better than anticipated 5% in the three months to 30 July, but warned it was expecting a slowdown in growth to 1% in the second half of the year as the cost of living crisis hit shoppers’ budgets.

The first-half sales performance prompted Next to raise its full-year profit estimate to £860m, which would be 4.5% higher than last year.

Joules has been listed on the London stock market since 2016, having been founded in 1989 when Tom Joule began selling clothes from a country show stall in Leicestershire.

Read more:
Next in talks to take £15m stake in struggling chain Joules

UK energy bills to hit £4,000 by January as gas prices spiral out of control

Hospitality hit as consumers cut back