Popular
BREAKING: Maricopa County ‘s Ministry of Truth BLOCKS...
Despite Failed Ballot Initiative Leftist Katie Hobbs Attempts...
Inflation Soars to 10% in Europe – Euro...
More Cowbell in Ukraine
Arizona Has A SOROS-BACKED Democrat Running For District...
“It’s Not About Kicking Balls in the Authority...
CONFERENCE SATURDAY: “The Rise of TRUTH, The Demise...
MUST-SEE VIDEO: “Maybe God Is Tapping Me On...
Kamala Harris Suggests Hurricane and Disaster Relief Should...
“Those Who Benefit Are the Ones Who Have...
Home Politics Russian State TV: North Korea Offers Russia 100,000 ‘Volunteers’ To Fight War Against Ukraine In Exchange For Grain And Energy
Politics North Korea has agreed to send 100,000 soldiers to aid Russia in its war against Ukraine, according to Russian state TV.

“There are reports that 100,000 North Korean volunteers are prepared to come and take part in the conflict,” announced Igor Korotchenko, editor-in-chief of Russia’s National Defence journal on Rossiya 1 channel, the New York Post reported.”If  North Korea expresses a desire to meet its international duty to fight against Ukrainian fascism, we should let them.”

Pressed on whether authoritarian North Korea, where total obedience to the government is required, has actual volunteers, Korotchenko praised the people of North Korea, noting they are “resilient and undemanding” and “motivated,” he said. “We shouldn’t be shy in accepting the hand extended to us by Kim Jong-un.” 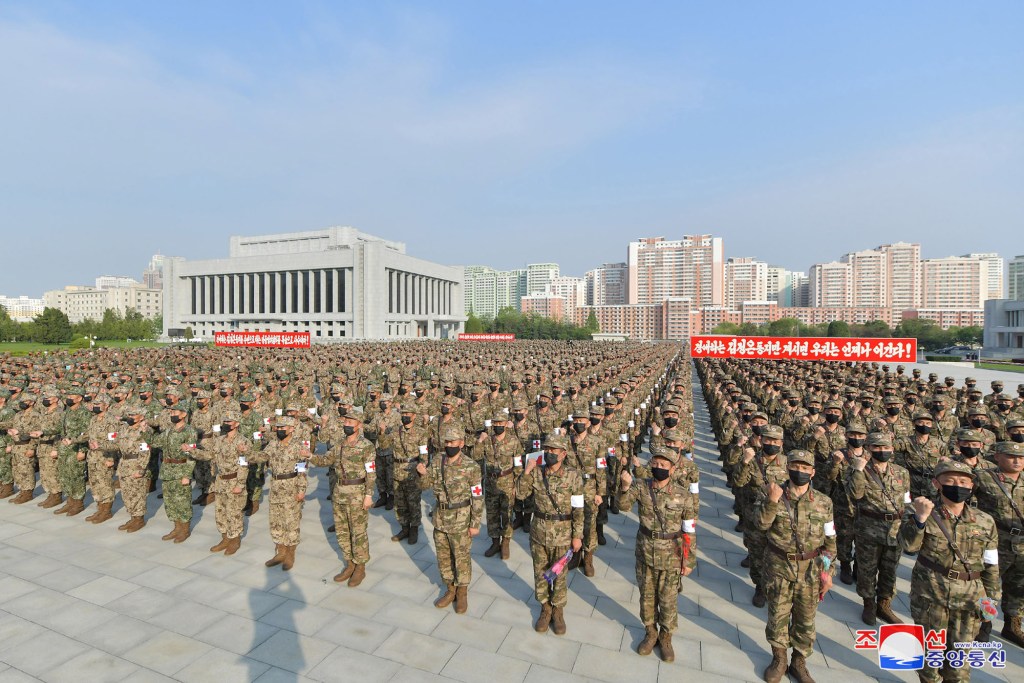 “If North Korean volunteers with their artillery systems, wealth of experience with counter-battery warfare and large caliber multiple launch rocket systems, made in North Korea, want to participate in the conflict, well let’s give the green light to their volunteer impulse,” he said. “If North Korea expresses a desire to meet its international duty to fight against Ukrainian fascism, we should let them. It was the ‘sovereign right of the DPR and LPR to sign the relevant agreements.”

With approximately 1.8 million foot soldiers, 949 fighter jets, 6,000 tanks and 83 submarines, communist North Korea has one of the world’s largest armies in terms of manpower.

“Korean builders who are highly qualified, hardworking and ready to work in the most difficult conditions, will be very serious” role in repairing destroyed infrastructure in Ukraine’s eastern region Donbas.

Moscow is attempting to gain control of  Donbas, a largely Russian-speaking territory comprised of Luhansk and Donetsk provinces, where pro-Moscow separatists seized territory after the Kremlin annexed Crimea to the south in 2014.

In exchange for soldiers and builders, Russia will supply grain and energy to alleviate food struggles in North Korea’s afflicted economy.

Russia’s military force is reportedly depleting after unsuccessful attempts to take critical parts of Ukraine, including the capital of Kyiv, over the past six months since the start of the war.

The Biden administration is slated to allocate a $1 billion security weapons package for Ukraine, including ammunition for long-range weapons and armored medical transport vehicles.

Breaking: Joe Biden to Send Another Billion Dollars to Ukrainian Regime and Oligarchs to Prop Up War Machine

The new package would amount to a total of $63 billion in aid Biden has delivered to Ukraine since Russia began its invasion.

The package is expected to be announced as early as Monday, but  Joe Biden had not yet signed the next weapons package, Reuters reports.

“The new package follows a recent Pentagon decision to allow Ukrainians to receive medical treatment at a U.S. military hospital in Germany near Ramstein air base,” the publication notes.