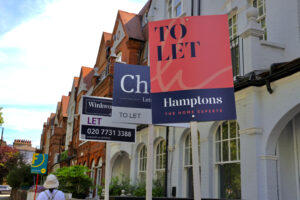 Average private rents in Britain have hit record highs, jumping by more than 20% in some areas such as Manchester, new data shows.

The average advertised rent outside London is 11.8% higher than a year ago, while in the capital it is up by 15.8%, according to the property website Rightmove.

The rise in housing costs is piling more pressure on households already feeling the strain of the cost of living crisis, and has been largely blamed on demand for rental properties greatly outstripping supply, leading to intense competition among tenants for what is available. Rising interest rates are also feeding through to tenants, with many landlords on tracker rates.

During the period from 1 April to 30 June, the average advertised asking rent outside London hit another new record of £1,126 a calendar month, Rightmove said. This figure has jumped by 19% – or £177 – in the two years since the pandemic started.

In London there was also a new record average advertised rent of £2,257, and the website said the 15.8% annual rate of growth was “the highest ever annual rate of any region”.

However, some locations have seen even bigger hikes. Rightmove’s table of rental price hotspots was topped by Manchester, where the average asking rent is up 23.4% in a year – from £913 in the second quarter of 2021 to £1,127 in the same period this year.

In second place was Chatham in Kent, where the equivalent increase was 21.4%, while in third place was Liverpool, which saw a 19.4% rise.

Three seaside towns – Weymouth in Dorset, Torquay in Devon and Margate in Kent – saw above-average annual increases of 19.1%, 18% and 16.9% respectively.

In the wake of the pandemic, many tenants are continuing to re-evaluate what they want from a home and where they want to live. Some have decided they want to live in the suburbs, the countryside or by the coast, which may help explain why some of the biggest rent rises have been recorded in many seaside towns and in parts of Wales.

The figures provide the latest evidence of how the London’s rental market is experiencing a dramatic bounceback. A few months into the pandemic it was being reported that private rents in some parts of London had tumbled by up to 20%, with landlords forced to slash what they charged as tenants quit the capital, international student numbers plummeted and companies put relocation plans on hold.

But the return to the office, more overseas students looking for a place to live and companies moving or expanding have all fired up the market.

Richard Davies, managing director of estate agent Chestertons, said: “Those who secured a property at a discounted rental rate during the pandemic are keen to hold on to this deal as long as possible, particularly in the face of rising living costs.”

He added that the various factors at play had “created an extremely competitive market for tenants, where many offer landlords over asking price in order to secure a property”.

Rightmove said the stock of available rental properties was down 26% compared with last year’s levels, while demand was up 6%.

It added that average monthly rental payments were now 40% higher than they were 10 years ago, while typical mortgage payments for the same properties were up 13%.

An estimated 11 million people rent privately in England alone, and the sector has doubled in size during the past 20 years.

The dividing wall between social and traditional media...

Post-lockdown jobs boom ‘is over’ as employers worry...

The difference between insolvency and bankruptcy, explained.

September 29, 2022
Join The Exclusive Subscription Today And Get Premium Articles For Free
Your information is secure and your privacy is protected. By opting in you agree to receive emails from us. Remember that you can opt-out any time, we hate spam too!