Sainsbury’s warns of more consumer pain ahead as sales drop 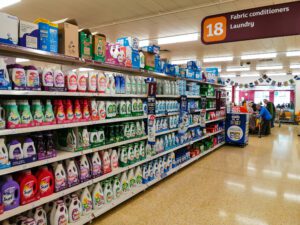 The financial pressures facing consumers will “only intensify” this year, J Sainsbury has warned after it posted a 4 per cent drop in quarterly sales.

Britain’s second largest supermarket chain said that sales of grocery items fell by 2.4 per cent over the 16 weeks to June 25, while general merchandise sales of non-food goods dropped by 11.2 per cent amid fragile consumer confidence and surging inflation.

Simon Roberts, the chief executive, said that customers were “watching every penny and every pound” and that “we are seeing some switching into economy own-label” brands. He also said customers were cutting back on big-ticket items such as technology and furniture at its Argos chain.

Wages are failing to keep pace with inflation, which reached 9.1 per cent in May. Food inflation is predicted to hit 15 per cent this summer, according to some forecasts.

Sainsbury’s first-quarter trading performance was more resilient than expected in the City, with the overall 4 per cent like-for-like decline less than the 5.4 per cent consensus forecast among analysts and after a 5.6 per cent decrease in the fourth quarter of Sainsbury’s last financial year. The surge in petrol and diesel prices meant that, including fuel, sales were up by 2.9 per cent in the quarter.

Supermarkets have been accused of unjustifiably profiting from soaring fuel prices, including by Justin King, a former chief executive of Sainsbury’s.

Roberts, 51, said that Sainsbury’s was “watching this issue very closely” but that its fuel pricing remained “really competitive”.

Grocery sales were supported by the Platinum Jubilee celebrations and also Sainsbury’s convenience stores. Sales of beer, wines and spirits during the jubilee week were its highest outside of Christmas and Easter. Roberts said the grocer had outperformed the market at “key events” such as the jubilee, as customers “look to Sainsbury’s when they want to treat themselves, particularly at special occasions”.

Sainsbury’s reiterated its full-year financial forecast of underlying profit before tax of between £630 million and £690 million, which would be a decline on the previous year’s £730 million.

The update lifted shares in Sainsbury’s by 1.2 per cent on the London Stock Exchange, but the stock is down by almost a quarter this year. The shares closed up 2¼p, or 1.1 per cent, at 210½p.

The retailer is more exposed than other supermarket chains to general merchandise sales, a part of the market particularly under pressure from falling disposable incomes, because of its Argos outlets. Sainsbury’s said the sales trend for general merchandise and clothing improved after the first five-week period last year when non-essential retail was closed during lockdown.

The year-on-year quarterly fall in grocery sales reflected the pandemic impact, when supermarket sales soared, and were up by 8.7 per cent compared with before the crisis. Sainsbury’s also said its volume market share performance had grown since before the pandemic.

Sainsbury’s is spending £500 million over the two years to next March, funded by cost savings, “to keep our prices low, especially on the products customers buy most often”, and as it seeks to dissuade shoppers from switching to Aldi and Lidl, the German-owned discounters. Sainsbury’s is price-matching Aldi on 240 products including meat, fish and poultry and dairy.

Analysts at Bernstein said that “despite Sainsbury’s continuing to under-inflate the market by not passing on all inflation, it still underperformed Tesco in the quarter (whose sales fell by 1.5 per cent) and holding back inflation will [put] pressure on margins”.

Alongside its update, Sainsbury’s said Kevin O’Byrne, 57, its chief financial officer, who joined the board in 2017, would retire in March and would be succeeded by Blathnaid Bergin, 47, its commercial and retail finance director.