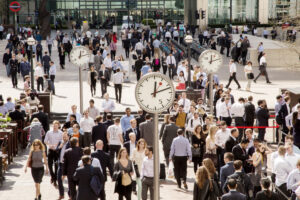 Millions of Brits will get a modest boost in their pay packets this month as they grapple with surging living costs, because – from today – the threshold at which people pay National Insurance (NI) will increase.

The UK Government has previously said this will benefit nearly 30m working people with a typical employee saving over £330 in the year from July.

The move follows a controversial 1.25 percentage point increase in NI in April, to help pay for health and social care, which came amid a string of other bill hikes, including a jump in the energy price gap.

Seven in 10 (70 per cent) workers who pay National Insurance contributions (NICs) will pay less, even after accounting for the health and social care levy, the Government said previously.

Of those who benefit from the threshold increase, 2.2m people will be taken out of paying NICs altogether, it added.

Alice Haine, personal finance analyst at investment platform Bestinvest, said a £330 saving “won’t stretch far when you realise that only equates to £27.50 a month”.

She continued: “Yes, every penny counts in this cost-of-living crisis and for some, that £27.50 could be the difference between having dinner every night and sometimes going without.

“For others, however, that amount will barely make a dent in their budgets as they struggle to pay the household bills amid rampant inflation as soaring food, fuel and energy prices become the norm.”

Ms Haine added: “All of this is set against a backdrop of falling real wages where runaway inflation is eroding any pay uplift workers receive, so any saving will quickly be swallowed up.

“This is because the threshold at which NI kicks in had already increased in April, going from £9,568 to £9,880, with the main rate for employees rising to 13.25% from 12%, as the Government sought to bolster the NHS and social care by introducing a 1.25 percentage point health and social care levy.

“It means those on lower to middle incomes, earning less than around £35,000 are the biggest gainers this month, as they will see their NI bill cut by more than the amount they pay through the 1.25 percentage point levy.”