New ‘karaoke’ mode which rates your singing appears on Spotify 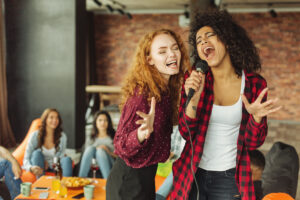 Spotify appears to have introduced a new karaoke feature that rates listeners’ singing.

Users of the streaming service have spotted the feature which allows them to sing along to tracks by turning down the song’s original vocals and providing lyrical prompts. Those who have used the feature say the app gives them a score out of 100 based on their singing.

Spotify has not yet made the feature widely available and is keeping quiet on details, but the feature could be more widely launched in an upcoming update to the app.

Users with the capability can select a song, scroll down to view lyrics, then tap “sing” to start karaoke mode.

A Spotify spokesperson said: “At Spotify, we routinely conduct a number of tests in an effort to improve our user experience. Some of those end up paving the path for our broader user experience and others serve only as important learnings. We have no further news to share on future plans at this time.”

Spotify, which is based in Stockholm, launched in 2008. Its audio streaming platform, which boasts 82 million songs and four million podcasts, is available in 183 countries. It makes its money through adverts and subscriptions for users who want to avoid advertising. The group listed on the New York stock exchange in 2018.

Its base of monthly active users grew to a record 422 million in the first quarter of this year, up 19 per cent on an annual basis.

The company has a number of high-profile partnerships with celebrities including the Duke and Duchess of Sussex, American podcaster Joe Rogan — and until October Barack and Michelle Obama. However, these podcast deals have lately become a source of controversy. The Obamas announced that they were breaking off their deal in May after it was said that they felt too restricted by Spotify’s exclusive terms, and singers Neil Young and Joni Mitchell removed nearly all their music from the platform in protest against Rogan hosting antivaxers in January.

Start-ups hit the brakes on hiring as costs...

Rail fares in England to rise below inflation...