Popular
“It Is the Same Thing as the Russia...
Little Adam Kinzinger Observes that Some Men Aren’t...
“What Difference at This Point Does It Make?”...
Pelosi on Bidenflation Scam Bill: “Mother Earth Gets...
Kamala Harris Giggles About Mar-a-Lago Raid Then Complains...
Even at His Island Vacation Getaway — Joe...
DeSantis Unveils Ultimate Florida License Plate – And...
Mother and Daughter Indicted by Corrupt FBI for...
Alec Baldwin DID Pull the Trigger on the...
President Trump Announces that He Has His Best...
Home Business Grant Shapps tells rail staff not to ‘risk striking yourself out of a job’
Business 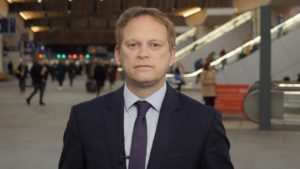 The transport secretary has told rail staff not to “risk striking yourself out of a job” just days before industrial action that will close much of the railway next week.

In a speech in which Grant Shapps said he was “appealing directly to workers” instead of unions, he claimed the strikes were “a bid to derail reforms that are critical to the network’s future, and designed to inflict damage at the worst possible time”.

Network Rail bosses have estimated that next week’s stoppages, by RMT members on its signalling and maintenance staff across Great Britain, as well as onboard and station staff working for 13 train operators in England, will cost the industry about £150m in lost revenue.

Speaking at a Siemens train depot in north London, Shapps said he wanted to see staff given a pay rise, but added: “Pay needs to be in step with the wider public sector.”

He refused to say what a fair level of pay would be, but this week he highlighted the 7% rise over a decade that police received, and the salaries of nurses that are 30% lower than average rail workers.

Shapps said: “Today the railway is in a fight. It’s not only competing against other forms of public and private transport. It’s in a battle with Zoom, Teams and remote working.”

After the pandemic, he said, strikes would “lose even more passengers, more revenue … and potentially lose thousands of railway jobs”.

He added: “Don’t risk striking yourselves out of a job. Don’t pitch yourselves against the public.” Questioned afterwards, Shapps said the words were “not a threat, it’s a statement of reality”.

He reiterated the idea that agency workers could be used, should strikes be prolonged. “Transferrable skills, sometimes called agency working, will be something which will become available as well in this particular dispute.”

Network Rail has said the cost of training agency workers “would be prohibitive” for most roles.

The transport secretary again ruled out joining ongoing talks to resolve the dispute, saying that it was a matter for the employers.

Nevertheless, several rail sources have said that they do not have leeway to offer pay rises to staff, and are bound by the Treasury. Rail contracts since the coronavirus pandemic are tightly controlled by the government, with firms paid a management fee and not collecting revenue.

Mick Lynch, the RMT’s general secretary, said: “The threats made by Grant Shapps today to railway workers’ livelihoods and their right to strike are disgraceful and will make RMT members even more fiercely determined to win this dispute.”

The leader of the TSSA union, Manuel Cortes, said: “Sadly, and perhaps predictably, what we heard from the transport secretary looked very much like threats and intimidation of workers instead of constructive dialogue.”

The union, which has balloted Network Rail and some train operator managerial staff for action and could call strikes next month, said the Department for Transport was not allowing train operators to make pay offers or guarantees on job security, which called into question what could be achieved through the negotiations.

It said many rail workers such as customer service staff were low paid, with members working for LNER receiving just above the full-time minimum wage of £18,278, while many station staff were on salaries of about £24,000.

Unions said the government was trying to make political capital out of the strike rather than seeking a resolution. Conservatives are seeking to tie Labour to the pay revolt, with campaign emails asking for support to “stop Labour strikes” and MPs posting on Twitter using a #StopLabourStrikes hashtag.

Labour said ministers were provoking rather than resolving the dispute. Louise Haigh, the shadow transport secretary, said: “Not only are ministers boycotting the talks, but they’re tying the hands of those at the table.”

“Ministers have the power to settle this dispute, so it is utterly farcical they haven’t spent a single second in talks since March. It is for the government to avoid these strikes and the disruption to the public. But it is becoming clearer by the day, ministers would rather provoke this dispute than lift a finger to resolve it.”

The three imminent 24-hour strikes, by 40,000 RMT members, will cause almost a week of disruption. The walkouts are on 21, 23 and 25 June and a special timetable will be in operation from 20 to 26 June. Several operators have already told passengers not to attempt to travel on strike days.

Large parts of Great Britain will have no passenger services at all on strike days, when about 20% of trains will run on mainlines and urban areas. Services will start later in the morning and be limited to about 60% of the normal schedule on subsequent days.

A separate London Underground strike will also bring much of the capital’s transport to a halt on Tuesday, with Overground and Elizabeth lines affected by the national strike throughout the week.

The cross-channel operator Eurostar confirmed it would also have to cancel early morning and late evening trains because of the strike – about three to five services a day.

Read more:
Grant Shapps tells rail staff not to ‘risk striking yourself out of a job’