Zerohedge reported on the Big Tech giant’s results this morning:

Twitter’s earnings’ revelations offer a glimpse into why the Board flip-flopped so fast and grabbed Musk’s ‘apartheid-unleashing’ offer so quickly.

However, buried deep in the filings was another little surprise for the billionaire who just bought the company.

Since the start of 2019, Twitter has been over-estimating the number of users…

In March of 2019, we launched a feature that allowed people to link multiple separate accounts together in order to conveniently switch between accounts.

An error was made at that time, such that actions taken via the primary account resulted in all linked accounts being counted as mDAU.

This resulted in an overstatement of mDAU from Q1’19 through Q4’21.

The table below provides updated values for mDAU from Q4’20 to Q4’21 alongside historical reported values for those same time periods. We are including one decimal place for both the absolute values and growth rates to give more detail around the magnitude of the changes. Note that recast data is not available prior to Q4’20 due to data retention policies, but our estimates suggest the prior period adjustments are not likely to be greater than those in Q4’20.

The adjustments are all one-way (lower) and are not de minimus… 1.9 million fewer users globally in Q4 2021 than they initially disclosed. 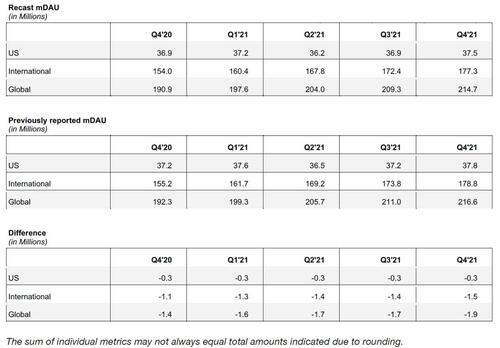 Zerohedge asks if the adjustment being reported now was provided to Elon Musk before his deal with the company or if it will be enough for Musk to make an adjustment.  Also, was this adjustment made in an effort to unhide something that’s been known for a while.

This issue was a growing issue and showed Twitter’s numbers were not accurate.  Having not reported these amounts accurately is not good for Twitter, especially at this time.

As it awaits the finalization of Elon Musk’s acquisition, Twitter reached 229 million users as of the end of the first quarter, with revenue and earnings per share both exceeding Wall Street estimates.

Revenue rose 16% from the year-ago period to $1.2 billion. Advertising made up $1.1 billion of that. Earnings per share totaled 61 cents, compared with 8 cents a year ago.

According to a review of Twitter’s financials, assets actually decreased during the quarter by half a billion from $14 billion to $13.55 billion with liabilities increasing by $1 billion.  Revenues and Net Income were up over the same period in the prior year.  These revenues, however, were under earnings targets from experts.

The post Twitter’s Quarterly Results Below Earnings Estimates – Adjustment to Number of Users Reported After Issue Found appeared first on The Gateway Pundit.